Since microwave oven invention, cooking and reheating food has been convenient because, unlike traditional conventional ovens, it consumes less energy and cooks food faster. But microwave ovens are surrounded by doubts that it causes the deadliest of diseases – cancer.

Let’s understand everything to clear out the wrong assumption and myth that microwaves cause cancer.

Do Microwave Ovens Cause Cancer?

Now, you have learnt that microwave ovens are safe for health, you may like to check these recommendations:

The term radiation in itself is considered harmful. The fact is that radiation is simply the transformation of energy through space or material, and even the heat of the sun is radiation. Many of the surrounding stuff gives off radiation that isn’t harmful.

What is Microwave Radiation?

The point of concern is some of these radiations can be absorbed by organisms changing the chemical structure, physiological and functional changes.

Other types of non-ionizing radiation include

Non-Ionizing radiation has low energy. So it doesn’t alter the chemical bonding of an electron, nor does it remove electrons from them.

Removing electrons is attributed to damaging DNA and causing cancer. Non-ionizing radiation only causes the molecules to heat and vibrate, which is marked as safe.

On the other hand, ionizing radiation is a high energy radiation capable of ionizing and detaching the electron from materials. This kind of radiation damages human tissue and can cause cancer.

You may also like to check – Best Stainless Steel Microwave

How Does Microwave Work? 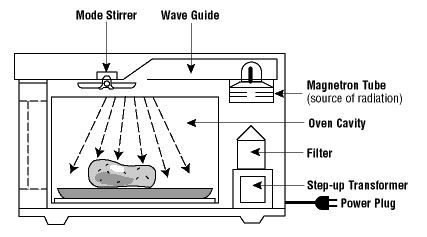 Microwave oven has a high-powered tube “magnetron,” which produces microwave radiation. These microwaves bounce off or reflect through the metal cavity constantly but are absorbed by the food.

When microwaves get absorbed by the food, the water molecules in the food start vibrating and start heating. In this way, the food gets cooked.

The microwave radiation doesn’t change the food’s chemical structure; hence it is completely safe to use microwave ovens.

ALSO LEARN – Microwave Vs. Toaster Oven Which is Better?

Does the Food Become Radioactive?

Microwave radiation is neither harmful nor does it make your food radioactive. So, the food you consume is safe and cooked to the standard.

FDA regulates the manufacturing of microwave ovens, and ensures that the emission of radiation is not hazardous to health.

The amount of microwave radiation emission allowed by the FDA is way less than the level that can pose threat to health and can cause cancer.

Furthermore, when the food is in the process of cooking in the microwave, standing near it also doesn’t cause any harm.

Effects on the Nutrients of Food 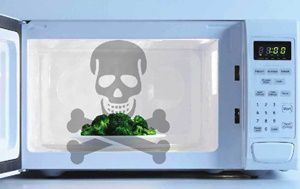 The foods’ nutrients always get affected no matter which way of cooking the food is being used.

Do Plastic Bowls in Ovens Cause Cancer?

Some of the plastic containers that have EDC (endocrine-disrupting chemicals) should be avoided at any cost. EDCs have chemicals that can disrupt hormonal balance and may cause cancer. 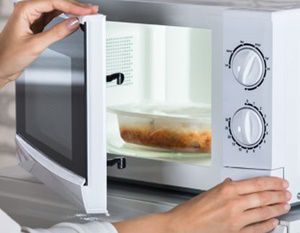 Plastic containing BPA and Phthalates should be avoided as these chemicals can leach into the food while cooking, which can invite cancer.

FDA has approved some plastics that have limited use of these chemicals.

However, FDA has also cautioned about the size of the microwave bowl, temperature, and amount of time that plastic bowl should be in the microwave.

Another point of consideration is how long we have been using plastic bowls in the microwave. Older plastic bowls should be discarded even though they were marked as “microwave safe.”

Scientific studies confirm that microwaves are safe and neither cause cancer in human beings nor does it have any negative impact on nutrients. As a precaution, we should always use microwave-safe glass bowls as there may also be some potential chemicals that can leach into food. Scientific studies are a continuous process, and we may still not know any harmful effects of microwaves in some foods. So we should use it in moderation and combine it with other conventional cooking methods to be on the safe side.