With almost 90% of Americans possessing a microwave, there is a hype about toaster ovens replacing microwaves, as toaster ovens are now considered “do-it-all” appliances that will soon change the market scenario for microwaves.

The dramatic debate of declining sales of microwaves has also added fuel to the fire.

The deadly fear of cancer through radiation, or you may feel the need to swap microwaves because your microwave is approaching its finite lifespan. The burning question may be brewing in your mind, can a toaster oven replace microwaves?”

Of course, you don’t have infinite space in your kitchen to stock up every appliance to bring a diversity of convenience. And you may have to choose one appliance only. But what would you lose if you select toaster over microwave?

We have compiled a list of the best microwave under $100 and the best stainless steel microwave, you should check them as well.

First thing first, they both have different working mechanisms. Although both appliances can cook and heat, but on the same time both have noticeable differences.

How Toaster Oven and Microwave Operate? 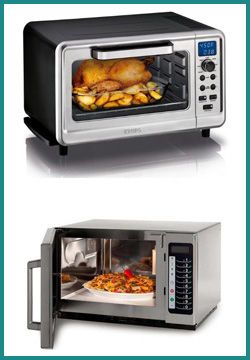 A toaster oven works like a standard oven. It has heating elements positioned at the top or bottom of the inside cavity that gets hot after electricity passes through them.

The heating elements vary according to the model of the toaster and radiates heat to cook the food from outside in, giving a brown color and crispy crust to the food.

On the other hand, microwaves emit electromagnetic waves known as “microwaves” that bounce within the microwave’s interior and excite the water molecules in the food.

The water molecules in the food heat up and cook the food. Since the cooking process is “inside-out” in foods with more liquid content, the top layer of the food doesn’t get brown or crispy.

Food that Cooks Better in Each of the Appliance 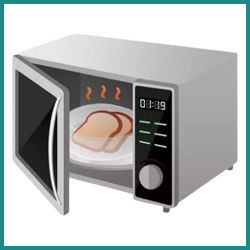 A toaster oven is just like a miniature standard oven and cooks all those foods which can be cooked in conventional ovens. It outshines the microwave in browning, crisping, toasting, and searing the food.

But it takes longer to cook and reheat the food. If a microwave reheats the food in 2 minutes, it might take 15-20 minutes. 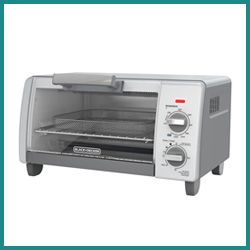 Microwaves cook all those types of food very well, which have good water content, such as vegetables, frozen food, tea, coffee, reheating liquids, and stews.

However, food that doesn’t have adequate water content in it gets chewy. Pizza and toasting bread are not suitable for microwaves. Some new convection models are replicating the food that can be cooked in the microwave, allowing us to handle pizzas and baking easily.

Why Microwave-Safe Utensils Don’t Get Hot?

Solids utensils don’t have water content in them, so the microwave don’t get absorbed, and the bowls and plates remain cool in microwave. But in toaster ovens, utensils do get hot, and you may need to change the dish before serving the food. 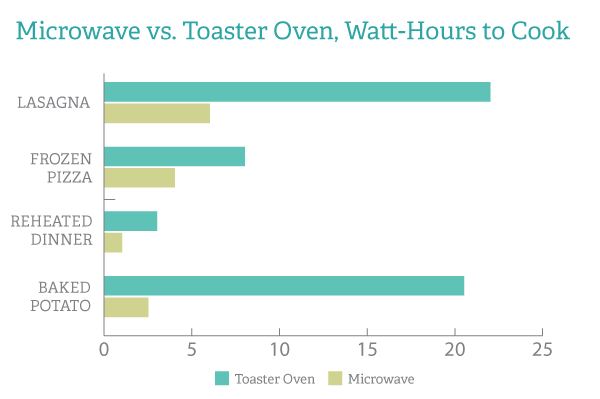 Both microwave and toaster ovens are energy efficient as compared to conventional ovens. You can check out our top picks for the best 700 watt microwave.

Most microwaves use around 600 to 1300 watts of power, and toaster ovens use slightly more energy (1200 to 1800 watts). EnergyStar has recommended both these appliances to reduce electricity consumption.

It has also been stated that microwaves save around 80% more energy when we use them for cooking smaller portions. Since microwaves cook faster than a toaster oven so comparatively, microwaves are more energy efficient.

Microwave is much easier to clean as compared to toaster ovens. The glass tray of microwave can be easily washed or you can also put a bowl of water in the microwave and use the steam to melt the grime.

The metal racks need time to clean, and the interior cavity walls get greasy with food splatters that may get charred with high temperatures. The heating elements should also be cleaned periodically.

Installation of Microwaves and Toaster Oven

Microwave models have various installation options. They can either be placed on a countertop or above the kitchen range. You can also install them in cabinet for a neat look.

The exterior of the microwave doesn’t get too hot and safer for under-counter installations.

Toaster oven interiors get as hot as 500 degrees. Most toaster ovens have thin walls which don’t have good insulation property, so the exterior gets too hot to touch. It requires adequate ventilation and is not safe to put in any confined space or cabinets.

Which Appliance is Safe to Use?

Microwaves are often feared due to radiation and its association with cancer. However, scientific studies suggest that microwaves are safer to use, and the FDA approves all microwaves for people’s safety.

“Burst your myth bubble and read. Can microwaves cause cancer“?

Toaster ovens don’t have such health concerns as it simulates the conventional oven in working principle. But you should be careful as the toaster oven may get too hot to touch and can cause blisters if accidentally touched by bare hands.

Does a Toaster Oven Cook Faster than a Microwave?

As we’ve just understood, the working mechanism of a toaster. It needs heating elements to heat the toaster oven itself, then the surrounding air. Some toaster ovens have a fan to circulate the hot air.

The hot air then reaches the food, then heats the surface of the food. The heat then gradually transfers to the center of the food to cook. Now, you know why a toaster oven takes a long time to heat the food.

So, if you want to replace microwaves with toaster ovens, you will have to wait longer for your food to get cooked.

Can a Convection Microwave Replace a Toaster Oven?

They have three operation modes.

So, you get additional benefits of a microwave along with convection mode. But they are pricier and consume more space than toasters. In functionality, they can replace a toaster oven by providing the added bonus of fast cooking at a lower temperature.

Does a Toaster Oven Cook Faster than a Microwave?

As we discussed the working mechanism of a toaster above. It needs heating elements to heat the toaster oven itself, then the surrounding air. Some toaster ovens have a fan to circulate the hot air.

The hot air then reaches the food, then heats the surface of the food. The heat then gradually transfers to the center of the food to cook. Now, you know why a toaster oven takes a long time to heat the food.

So, if you want to replace microwaves with toaster ovens, you will have to wait longer for your food to get cooked.

Should I Get a Microwave or Toaster Oven?

The answer to this lies in your cooking goals and needs. If you are always in a hurry and speed is your primary preference, you should choose a microwave oven.

Microwaves accomplish the cooking tasks conveniently and quickly but have limited cooking ability. You can select a convection microwave for more versatility, but it comes with a higher price tag.

If you want more versatility and good texture in food, then the best option is a toaster oven. A toaster oven cooks a smaller amount of food as compared to microwaves. So, if you don’t want to cook in several batches, a microwave would be better.

We have tried to cover all the differences, so you get a better decision before replacing microwaves with a toaster oven. Make a decision based on your preference and needs, learn all their features to buy the appliance to fulfill all your culinary goals.