“Seasoning” is usually associated with cast-iron pans to create a slick non-stick layer so that the food doesn’t stick. Many of you might not be familiar with the fact that seasoning a nonstick pan is an equally integral part of retaining the nonstick quality of the pan.

Nonstick quality can deteriorate over time, and when we cook food on high flame or wash the nonstick pan in the dishwasher, the pan’s non-stickiness takes the blow, and the food starts sticking to it.

What is Seasoning of Pan and Why it is Important?

Seasoning is coating your pan with a thin coat of oil to the inner nonstick surface of the pan for a pre-described time and temperature.

The thin oil coating polymerizes with the nonstick layer and fills all the pores, creating a smooth and uniform surface that is slippery enough so that the food easily releases the surface while cooking.

Extends Non-Stick Pan’s Life: Season creates an extra coating on the pan’s surface. When the food doesn’t stick, it minimizes the chances of chipping and scratches, which will eventually lead to the extended life of the non-stick pan.

Prevents From Rust: Seasoning also helps the pan from rusting in the long run.

Reduces Oil Usage: When your pan’s surface becomes smooth; and the food stops sticking as a result of seasoning, you won’t need extra oil during cooking. 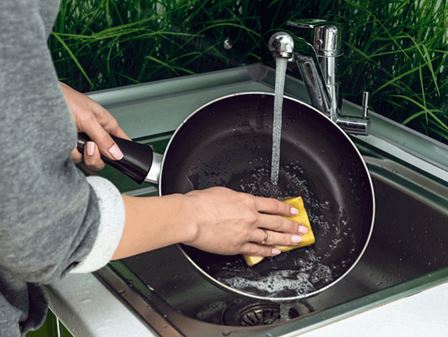 Before seasoning, you should clean it deeply and remove baked-on grease from the pan if there is any. Otherwise, oil coating would sit on the food and gunk build-up, destroying rhyme and reasons for seasoning the pan.

Step 1: If your pan has too much food build-up, especially rivets, then washing with soap and water won’t be enough. In that case, boil water on medium heat in the pan.

Step 2: Add two teaspoons of baking soda and ½ cup vinegar in it.

Step 3: when the water starts boiling, turn off the flame and let it cool down.

Step 4: When the water cools down, throw it and rinse the pan normally with soap and water.

Step 5: Dry the pan with a soft kitchen towel.

We will begin seasoning of a nonstick frying pan with a video: 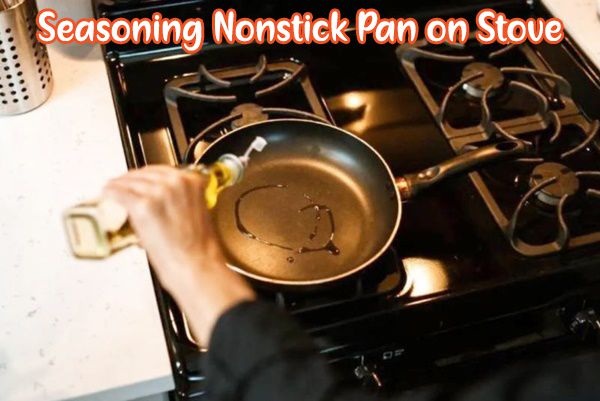 TIP: Gas cooktop users must make sure that either their non stock pan is safe for gas stove or not.

Seasoning Pan in the Oven 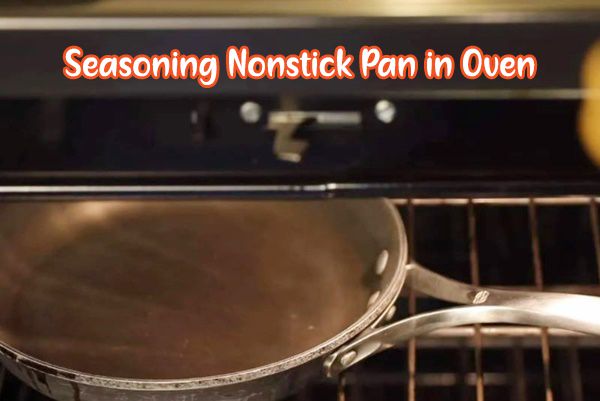 Can I Use Olive Oil to Season a Nonstick Pan?

Olive oil shouldn’t be used to season the pan as it starts breaking down even at medium temperature. Even though olive oil’s smoking point is (160° C), that is within the limits, but due to its nature and characteristics, chefs and manufacturers don’t recommend this oil.

Which Oil Should We Use to Coat the Nonstick Pan? 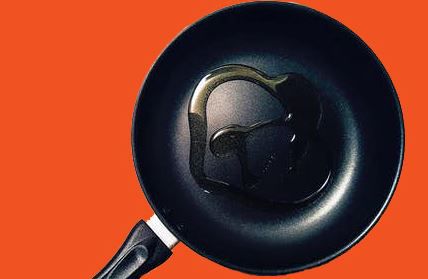 Any oil that has a high smoking point (above 150°C) and has enough viscosity can be used to coat the pan. Oils with low smoke points can burn and fume even at low temperatures, which fails the purpose of seasoning.

You can also use oil that has high unsaturated fatty acids, such as flaxseed oil. It helps in polymerization when it reacts with oxygen upon heating.

The best oils that can be used to season the pan is Canola, grape seed oil, vegetable oil, peanut, or coconut oil.

What Mistakes Do People Make When Seasoning Non-Stick Pan?

The first mistake people usually make is that they don’t read the manufacturer’s instructions, and even if they read the manual, they don’t adhere to the described guidelines.

If the manufacturer has instructed you to season the pan only on the stovetop, you should follow it and don’t put it in the oven for seasoning.

And if the manufacturer has specified a certain oil for seasoning, it’s best to stick to that particular oil only.

If you are re-seasoning your non-stick pan you must clean them properly before doing so, in this case these guides will help you:

How Often Should You Season a Nonstick pan?

Depending on the manufacturer’s instructions, you should season your pans twice a year. Some manufacturers also instruct you to season the pan more frequently if you are washing it in the dishwasher. The dishwasher’s harsh detergent strips the pan off its glossy sheen and the nonstick ability; that’s the reason such pans need to be seasoned often.

Can You Season Old Nonstick Pans?

Yes, you can season an old nonstick pan if it hasn’t started chipping or the scratching is not that bad. But if the coating has started showing signs of degradation in certain areas of the pan by chipping, it’s time to replace it.

Are You Using Your Nonstick Pans All Wrong? Find Out

In the end, we would say that if you take care of the pan’s maintenance by cleaning and seasoning properly, you will save money and energy spent on replacing the pan.