EM720CB7 Black+Decker 700 watts is a compact microwave with good capacity and works well with small families and cramped spaces. It is fairly economical and sustainable, coupled with a dash of standard features.

Surprisingly, it performs pleasingly well in all aspects even after having only 700-watts power output. For more options you can check our recommendations for the best 700 watt microwave. 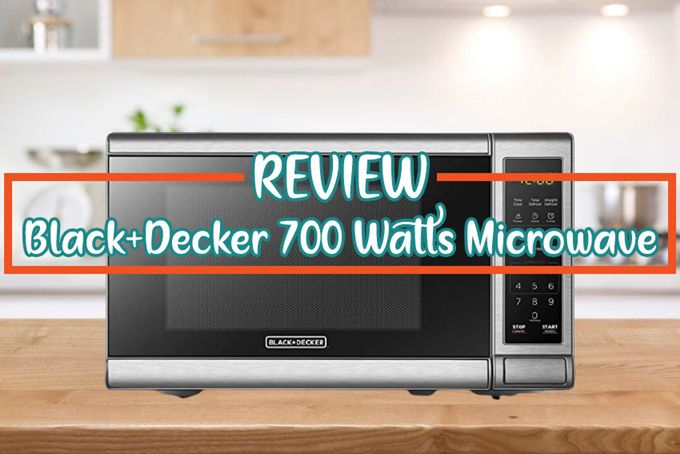 The Black+Decker Microwave EM720CB7 we are reviewing here is not the largest, and smartest home appliance that shares the limelight.

In fact, it is the modest and humble 700 watts microwave that doesn’t come under exorbitant appliances.

So, our review is based on the value it provides under this budget as we aren’t comparing it with the enormous-sized microwaves with tonnes of tech-rich features and sensors. 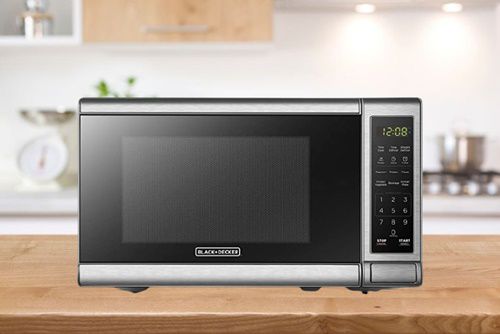 Home appliances are now largely made of corrosion-resistant stainless steel, as it adds a luxurious vibe to your kitchen.

Black+Decker EM720CB7 has a black exterior with a stainless steel frame surrounding it.

Its impactful compact appearance is worth noting but doesn’t have the “oh-so-wow” factor in it.

The Black+Decker oven model is available in four variants, but we are focusing on 0.7 cubic feet, with the smallest footprint. 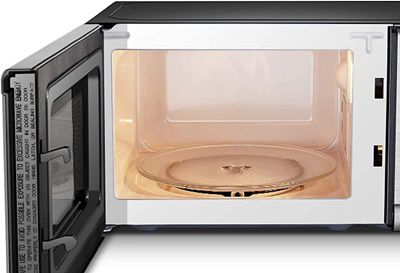 Its exterior dimensions are approximately 17 inches wide, 13 inches in depth, and 10 inches in height. Don’t get confused and mix this up with its interior cavity.

If we subtract the measurements of the outer walls, the interior is only 11 inches wide, 7 inches in height with 10 inches depth.

So, an average 11 or 12 inches diameter dinner plate won’t sit well in the interior cavity of the microwave. You will have to tilt the plate. And it isn’t a brainy solution to try to fit a plate full of food.

Since other microwaves such as Amazon Basics also don’t offer a spacious interior with a moderate price tag, one shouldn’t expect it to be roomy.

The compact microwave with a gleaming, sleek stainless steel frame is befitting for a cramped kitchen, dorm rooms, and small families.

Some one who is looking for a type of microwave for home use, it is a good choice to go for. It’s so compact that it can easily sit on any countertop or kitchen cabinet in a small to medium-sized home.

If you are only concerned about reheating, defrosting and do not yearn for high-tech sensors, inverter technology, grilling, and convection mode, then Black+Decker is the appreciable option for you.

It features all the standard options and a lot of presets for quick cooking. Before we move on to its performance, let’s have a glance at its features. 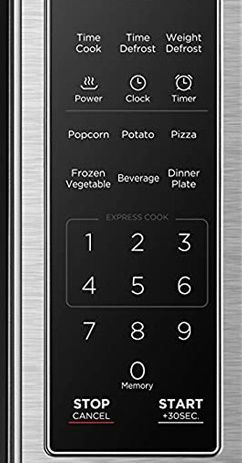 The six presets buttons are a life-saver if you can’t estimate cooking time or frequently make items from a pre-programmed menu.

These pre-programmed menu buttons can be used for baking potato, reheating pizza, popping popcorn, and to heat-up tea, coffee, and soup.

You find these usual slate of presets in almost all 0.7 cubic ft. microwaves, so it all comes down to the performance. Even though these are the simplest auto-cook buttons, you may still need to figure out how these work by reading from the manual.

Black+Decker oven features 10 power levels. The easiest explanation is that it’s similar to how you choose to control the heating temperature on stoves using dial knobs.

Low power levels can be utilized to retain heat, defrost gently, melt the chocolate, set the custard, or make sauces.

The inclusion of a safety feature such as a child safety lock makes the microwave more desirable. It prevents accidental usage of the microwave control panel by kids.

The express cooking option is nothing but provides you ease by accelerating the process of time selection while cooking in the microwave.

Although it’s not a high-end microwave with sensor technology that measures the moisture level of the food and shuts it off, it has an alternative memory function.

You get to use the “defrost by weight” or “defrost by time” buttons that make the defrosting process easier. But you will have to put the values manually as it lacks the standard defrosting option as seen in other microwaves.

How Well Does it Perform?

Black+Decker 700 watts microwave oven is considered a low-wattage microwave. But surprisingly, it reheats the leftovers quite well.

You won’t get over-heated food that goes from sizzling to splattering on the microwave’s wall within five seconds. Thankfully, interior LED lighting makes it easier to peek at cooking progress through the window.

However, since all microwaves heat the surface of the food faster than the interior, we recommend you stir your food during reheating to avoid cold spots.

The most problematic sensor-powered preset in low-wattage microwaves is popcorn.

A 600 watts microwave isn’t suitable to pop the popcorn, but Black+Decker has an option for the popcorn. With only 100 watts difference than 600 watts, it managed to pop kernels well enough.

Since it’s still low wattage, you don’t experience burnt popcorn, which is a positive. But still, a handful of corns simply refuse to pop.

Overall, its performance was appreciable, that too, at such a reasonable price tag of under 100 dollars.

It performs satisfactorily in all cooking areas. But Black+Decker should rectify a few flaws.

The buttons on the control panel are hard to read due to the dark background. Additionally, it doesn’t have the conventional pull-open door handle and boasts a push-open button to get the door to open.

The button is stiff and a little bothersome; you have to use your other hand to balance the microwave while using the button. Once you get the hang of handling it, it becomes smoother and not-so-taxing.

Although, all microwaves produce some noise when it’s in use. Black+Decker is still considered a little noisier than its counterpart, such as Amazon Basics.

If this microwave does not meet your requirements, you can check these best microwave ovens under $100.

AmazonBasics is also a 700 watts microwave and has almost the same price range. Both microwaves have garnered many positive reviews from users.

Let’s compare the functionality of both microwaves; Black+Decker vs. AmazonBasics.

Even though both have similar capacities, Amazon Basics belongs to a smart microwaving class. Keeping in mind the above key points, we can safely say that both microwaves perform microwaving functions substantially well.